Four critical reviews of this literature were identified. In the review by Seppänen et al. [1], 20 out of 27 studies found a statistically significant increase in reporting of at least one SBS symptom among occupants of the study buildings with lower ventilation rates. In nine of these studies, there was at least an 80% increase in the fraction of occupants reporting at least one of the types of SBS symptoms in the buildings with lower ventilation rates. The second critical review [2] was performed by an interdisciplinary group from Europe and concluded that “increasing the ventilation rate …..decreases the prevalence rates of SBS symptoms.” This interdisciplinary group also concluded that “ventilation rates below 53 cfm per person (25 liters per second per person) in offices can increase the risk of health and comfort problems”. The third review [3] by another interdisciplinary group concluded that “higher ventilation rates in offices, up to about 53 cfm [25 L/s] per person are associated with reduced prevalence of sick building syndrome symptoms”. The forth and most recent review [4] considered three studies of offices that had been published between 2000 and 2011. In two studies, symptoms decreased as ventilation rates increased or indoor CO2 concentrations decreased. However, in one of these studies increased ventilation rates failed to reduce symptoms when the particle filter was old and loaded with particles. The third study of offices included in this review had a contrary finding, increased ventilation rates were associated with increased general symptoms (e.g., headache, difficulty concentrating) but not mucosal or skin symptoms; however, the reliance on ventilation rate estimates (without measurements) was a major study weakness.

However, in a contrary finding, eye symptoms decreased as the CO2 concentration increased. A second study from Taiwan [8] compared prevalence rates of SBS symptoms at two different time periods within a single office building. Higher CO2 in the second monitoring period (mean 876 ppm) relative to first period (mean 431 ppm) was associated with increases in all symptoms but shortness of breath, skin irritation, and lower respiratory symptoms. The increases of about 75% were statistically significant for eye irritation, tired or strained eyes, dry, itchy, or irritated eyes; difficulty remembering or concentrating; and upper respiratory symptoms. Finally, in a small study of 170 workers in two offices of Malaysia [9], there were several-fold statistically significant increases in symptoms with higher CO2 concentrations in the old building, but no associations in the new building which had very low CO2 concentrations (below 478 ppm) implying very high ventilation rates. Thus, the newer research generally finds decreased SBS symptoms in offices with higher ventilation rates, but suggests no beneficial effects of increasing very high ventilation rates.

The largest U.S. study of building characteristics and occupant symptoms is the EPA Building Assessment Survey and Evaluation (BASE) Study of 100 representative office buildings.  Analyses of data from this study [10] indicate a general decrease in SBS symptoms as study space ventilation rates increase from as low as 10 cfm (4.7 L/s) per person up to approximately 25 to 35 cfm (12 to 17 L/s) per person, while current U.S. building codes and professional standards generally require a minimum of 15 to 20 cfm (7 to 9.4 L/s) per person in offices. Twenty percent to 30% fewer occupants reported SBS symptoms in study spaces with ventilation rates above 20 to 25 cfm (9.4 to 11 L/s)  per person, compared to study spaces with lower rates typically ranging between 10 and 20 cfm (4.7 and 9.4 L/s) per person. 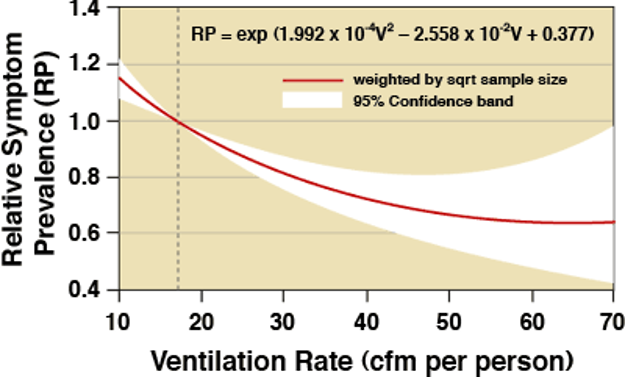 The analyses underlying Figure 4 have several important limitations. The amount of original data available in a useable form was quite limited and results published since 2008 were not included in the analysis. Only eight useable studies with 43 data points were identified. Because of the limited data, distinct analyses for different types of SBS symptoms were not performed. In actuality, the relationship of ventilation rates with SBS symptoms may vary with symptom type. In addition, one would expect the relationship of SBS symptom prevalence with ventilation rate to vary depending on the strength of indoor pollutant sources, the levels of outdoor air pollution, and other factors. For example, in buildings with high indoor pollutant source strengths ventilation rates may have a larger impact on SBS symptom prevalence rates than in buildings with weak indoor pollutant sources. Thus, Figure 4 provides only an estimate of the average relationship, based on the available data. The equation shown on Figure 4 should not be used for ventilation rates below 10 cfm (4.7 L/s) per person or above 70 cfm (33 L/s) per person.

Since 2011, the effects of ventilation rates on SBS symptoms has been assessed in three new intervention studies in chamber facilities that are similar to real offices. In each study, ventilation rates were changed with all other factors held constant. Occupants completed surveys to indicate their SBS symptom severity, while experiencing the different ventilation rates; however, the occupants were not informed of the ventilation rates. Compared to cross sectional studies, these intervention studies reduced the potential for error due to confounding by factors other than ventilation rate by assessing changes in symptoms within each occupant and by maintaining constant environmental conditions other than ventilation rates. However, these studies had a small number of subjects and only few hour periods of exposure at each ventilation rate condition. In a first set of experiments using a unique two-chamber system, Maddalena et al. [13] changed the ventilation rate per person between 5.5 and 18 cfm per person (2.6 and 8.5 L/s per person) while maintaining very low levels of pollutants from the chamber and its furnishings. There were no statistically significant changes in symptoms except, contrary to expectations, an increase in eye symptoms with increased ventilation per person.