Most of the relevant studies were performed in a laboratory setting representative of real offices [1-4]. In these studies, subjects performed tasks representative of office work, such as proof-reading, text typing, and simple arithmetic operations. Speed and accuracy in these simulated work tasks was measured and used to indicate work performance. In three studies [1, 2], a section of well-used 20 year old carpet (pollutant source) removed from a complaint building was placed in the laboratory, but hidden from the study subjects. Carpets are known to be sources of volatile organic compounds; however, no specific data have been published on the pollutant emissions from this particular carpet. Performance, based on typing, addition, and proof-reading tests – each receiving equal weight -- was improved by approximately 4% by removing the carpet, as depicted in Figure 5. Increasing the ventilation rate per person with the pollutant source present also resulted in better work performance. 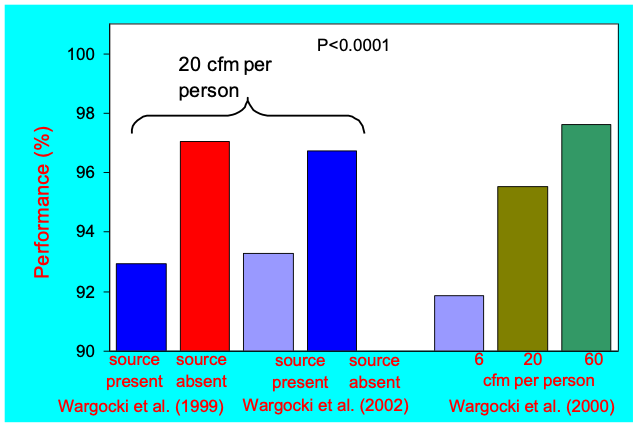 Figure 5: Controlled laboratory studies performed in Denmark show that performance, based on typing, addition, and proof reading tests, improved when an indoor pollutant source was removed (left sets of bars) or when the ventilation rate per person was increased with the pollution source present. The pollution source was a carpet taken from a complaint building.  [Figure 5 reproduced with permission.]

Bako-Biro [3] performed similar laboratory studies, but with three-month old personal computers with cathode ray tube (CRT) monitors as the pollutant source.  When the computers were removed, performance in proof-reading and in arithmetic calculations was unaffected; however, text typing errors diminished by 16% and typing speed improved slightly. Additional research by Bako-Biro [5] used three-year-old linoleum flooring, shelves with books and paper, and three-month-old caulk sealant as indoor sources of volatile organic compounds (VOCs). Speed and accuracy in arithmetic calculations were used to assess work performance.  In this study, few and only small statistically-insignificant impacts of the pollutant sources on performance were identified, although there is some evidence of improved text typing when the pollutant sources were removed. The pollutant sources used in both studies emitted VOCs; however, the types of VOCs emitted and the emission rates differed between the studies.

A study of the effects of pollutant source removal on work performance was performed in a call center with the time required to talk with customers (talk time) used as a measure of work performance [6]. The pollutant source was a six month old particle filter in the building’s ventilation system that filtered a mixture of outdoor and recirculated indoor air. When outdoor-air ventilation rates were high (roughly 50 cfm per person) and the used filter was replaced with a new filter at times unknown to the call center workers, and with all other relevant factors including the total supply air flow rate maintained as constant as possible, the average talk time decreased by approximately 10%. However, replacing the old filter with a new filter did not affect talk time when the outdoor air ventilation rate was low (roughly 5 cfm per person). The study did not determine the types of pollutants emitted by the old filter; however, prior research has shown that old particle-loaded filters can be sources of VOCs, particularly when the filters are exposed to ozone [7], a common outdoor pollutant that can be introduced via the ventilation air.